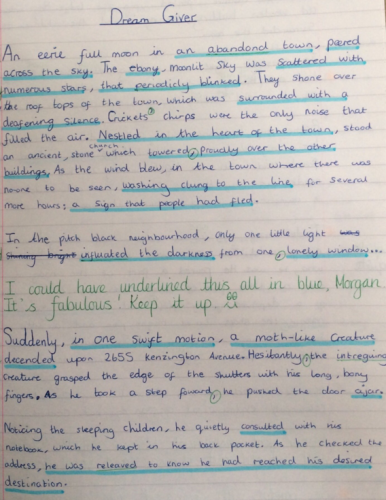 An eerie full moon in an abandoned town peered across the sky. The ebony, moonlit sky was scattered with numerous stars that periodically blinked. They shone over the roof tops of the town which was surrounded with a deafening silence. Cricket chirps were the only noise that filled the air. Nestled in the heart of the town stood an ancient stone church which towered proudly over the other buildings. As the wind blew in the town where there was no-one to be seen, washing clung to the line for several more hours; a sign that people had fled.

Suddenly, in one swift motion a moth-like creature descended upon 2655 Kensington Avenue. Hesitantly, the intriguing creature grasped the edge of the shutters with his long, bony fingers. As he took a step forward he pushed the door ajar.

Noticing the sleeping children he quietly consulted with his notebook which he kept in his back pocket. As he checked the address he was relieved to know he had reached his destination.

The deprived young children were snoring while sleeping contently, despite the absence of their parents. As the little orphanage boy slept peacefully in his checkered bed, the creature perched upon the ledge. He entered the old, wooden building peering around the children that surrounded the room.

The passage light was shining through their open, mahogany door. It was decided that the
children were scared of the dark and needed to feel safe, so this was the best action.

Before very long, the visitor fluttered down and lay his hessian bag on a child’s bed. His eyes widened as he peered inside, with the light shining on his face. As he made his way to the first six-year-old child, he took out a glimmering egg an cracked it open. 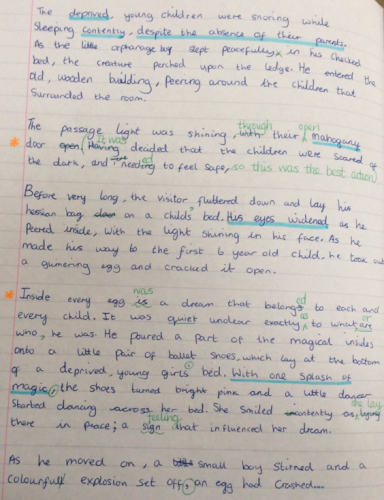 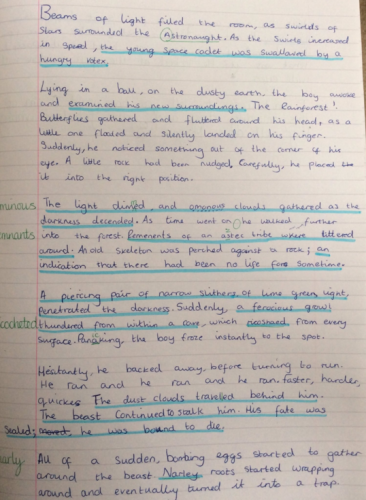 Inside every egg was a dream that belongs to each and every child. It was quite unclear exactly as to what or who he was. He poured a part of the magical insides onto a little pair of ballet shoes which lay at the bottom of a deprived young girl’s bed. With one splash of magic the shoes turned bright pink and a little dancer started dancing across her bed. She smiled contently as she lay there in peace; a feeling that influenced her dream.

As he moved on a small boy stirred and colourful explosion set off. An egg had crashed…

Beams of light filled the room as swirls of stars surrounded the astronaut. As the swirls increased in speed the young space cadet was swallowed by a hungry vortex.

Lying in a ball on the dusty earth, the boy awoke and examined his new surroundings. The rainforest! Butterflies gathered and fluttered sound his head as a little one floated and silently landed on his finger. Suddenly he noticed something out of the corner of his eye. A little rock had been nudged. Carefully he placed it into the right position.

The light climbed and ominous clouds gathered as the darkness descended. As time went on he walked further into the forest. Remnants of an Aztec tribe were littered around. An old skeleton was perched against a rock; an indication that there had been no life for some time.

A piercing pair of narrow slithers of lime green light penetrated the darkness. Suddenly a ferocious growl thundered from within a cave which ricocheted from every surface. Panicking, the boy froze instantly to the spot.

Hesitantly he backed away before turning to run. He ran and he ran and he ran. Faster, harder, quicker. The dust clouds travelled behind him. The beast continued to stalk him. His fate was sealed; he was bound to die.

All of a sudden bombing eggs started to gather around the beast. Gnarly roots started wrapping around eventually turned it into a trap.

With his arms covering his face sweat dripped down his brow. He was safe. With a jolt he awoke from his dream. A firefly noise was heard as it passed. He looked at the open window with wide eyes … What was it?

This gripping tale was written by Morgan from Simonside Primary School and we absolutely had to post it because we were enthralled from the first sentence! Thank you to Miss Lisa Pegman and Morgan for sharing this excellent piece of creative writing with us. Keep up the good work!