Scouts embark on a space journey 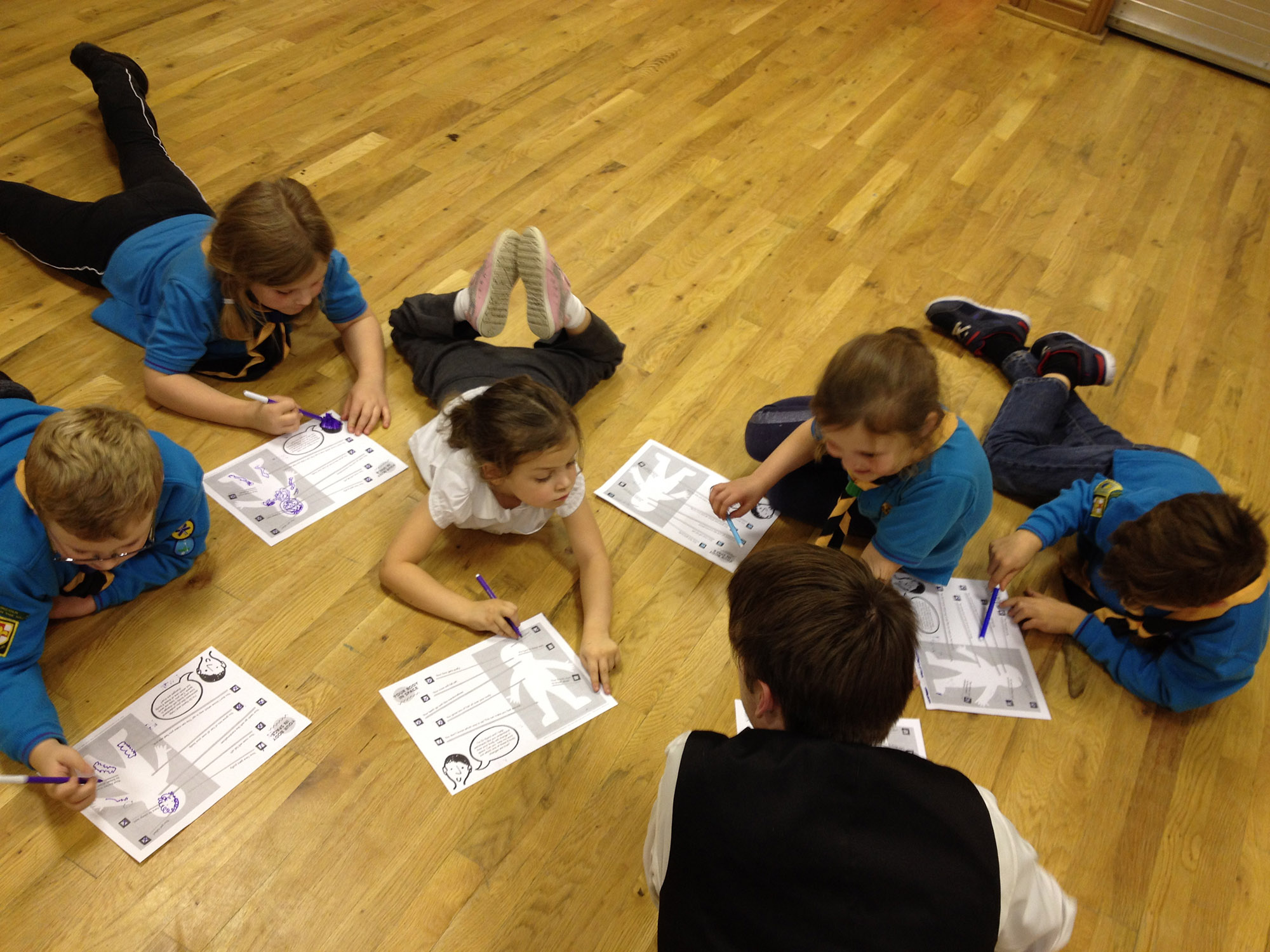 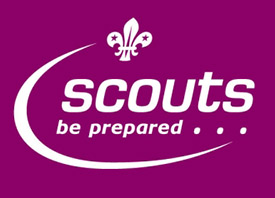 I’m sure you can recall a time when someone asked, ‘Do you remember where you were when…’ usually followed by a major historic event. Imagine future dinner table conversations, when our young people are asked if they remember where they were when the first British astronaut went to the International Space Station under the Union flag, and they reply, ‘Remember it? I was part of it!’

The young people in the 27th Lincoln Scout Group, with the support of Eagle Community Primary School, are headed for an out-of-this-world orbit whilst creating a lasting record of their involvement in the Principia Mission. As Major Tim Peake lives and works on the ISS, conducting scientific experiments like determining the ability of human life to survive, grow food, and undertake activities in microgravity conditions, we will be following along on Earth. Our group will imaginatively document their experiences in a unique Space Diary from Curved House Kids and the UK Space Agency Principia Mission outreach programme. 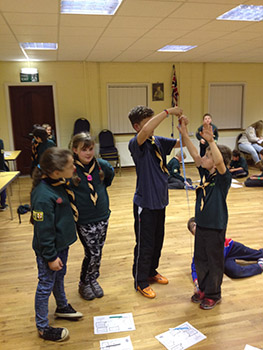 This week all seventy of our young people (aged 6 to 14) and leaders started their diaries, putting themselves into the boots of a real astronaut, and living up to the scouting motto, to find out how prepared we would be for space. Watching the introduction video from Lucy Hawking and Dallas Campbell, we found out why it is so important to be fit and healthy for space. Then we completed an Astronaut Workout – jumping for space, stretching up to measure how tall we are, perfecting our balance and floating postures, as well as steadying our breathing to remain calm in our space suits. The young people used these results to consider and discuss the physical impact on our bodies from being in a weightless environment. Finally, we had a look at nutrition and the sort of food astronauts – past and present – would eat, and designed our own healthy meal in our diaries to be packed up for our mission.

Our own space journey began at the beginning of October, on a group camp titled ‘There’s No Place Like Space’ which coincided with the launch of International Space Week.

Imaginations were unleashed on our ‘Area 51’ camp area with its own mission control (camp/office), ISS (kitchen and mess tent) and briefings in the ‘air lock’. Young people became space cadets for the weekend, split into mixed section/mixed age teams named after pods on the ISS (Unity, Harmony, Destiny and Quest), to take part in activities that accumulated points in our own weekend space race. 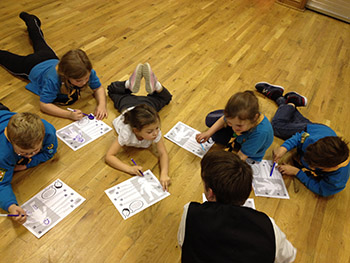 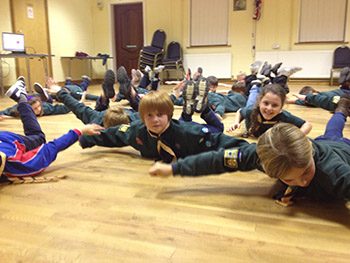 Our space race challenges included scaling the climbing wall in ‘Planet Exploration’ and decorating souvenir neckerchiefs with space related designs for ‘Space Pennants’, as well as pitching and striking a tent as part of cadets’ survival needs. ‘Ignition’ found the young people building and igniting small fires to be the first team to boil water, and in ‘Rocket Launch’ they explosively launched decorated plastic bottles using a foot pump and hosepipe to create hydro pressure.
‘We Come in Peace’ – interacting with other life-forms at camp fire – was a huge success and a ‘Spaced Out’ quiet area was used by many of the young people under the umbrella canopy of a glowing solar system for a quiet few minutes and planetary discussion. Even our menu was given a celestial makeover with dishes such as Black Hole Breakfast, Gibbous Grub, Moon Rock Meatballs, Radiant Wraps and Cosmic Cocoa.

As with any structured learning, our Scouting programme sets out requirements for all ages, making a balance of activities that not only cover traditional outdoor pursuits but a full range of interests and activities. From learning the names of planets to making a scale model of the solar system, or from knowing what to look for in the night sky to building our own satellite dishes…it’s all part of the Scouting programme. 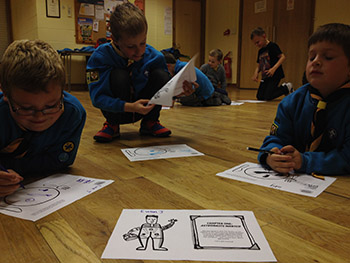 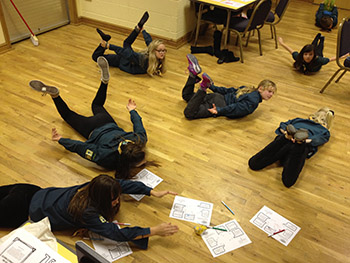 It’s not all science though; the Principia Mission has given us opportunities to explore humanity itself. Last week we prepared for a Remembrance Sunday parade, taking time to remember the servicemen, women and animals who have given their lives and those who continue to risk theirs. We also reflected on what symbols might be fitting to represent the many humans and animals who went into space, giving their lives to progress the space programme for mankind. We will display these symbols and take time to remember them all during our meeting on 28th January, the NASA Day of Remembrance.

During a ‘Top Secret’ briefing, the group was told of their involvement in the Principia Rocket Science project with RHS Gardening for Schools. We are so excited to know that Tim will be looking after rocket seeds on the ISS that will be making their way to us in Spring 2016, to grow and add our results into the national database. 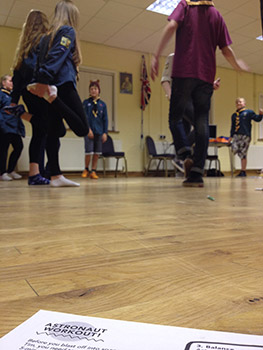 We’ll be enhancing our Space Diary use with Principia materials such as Mission X: Train like an Astronaut and Heston Blumenthal’s Design a Space Dinner as resources for diet, healthy eating, exercise, gardening and scientist/experiment badge work, whilst completing the 250 mile Space to Earth challenge during our hikes and expeditions. Our Scout programme links perfectly with the Space Diary chapters to inspire another generation into scouting, science and space exploration.

On camp, we had a ‘Scouts’ Own’ time allocated for reflection and spiritual thought. We talked about Tim, his hard work and perseverance, just two of the many positive qualities that have led to his incredible mission. We also thought about Rick Mastracchio, a NASA engineer whose applications to be an astronaut were repeatedly knocked back. Rick did finally make it to space nine years after his first application, because he refused to give up on his dream. We became confident of opportunities still to come, hopeful that whatever our dreams, whatever we already know, there is always something new to be found if we are brave enough to go and look for it, while recognising that it will take boundless enthusiasm and determination to get us there.

“If you work hard, aim high and follow your dreams then you can achieve what you set out to do.” Tim Peake, November 2015

Anything worth having may not be achieved in one giant leap, but through many small steps. It is reputed to be lonely up in space but we are going to have tremendous company taking our first mission steps, proudly alongside our very own rocket man, Tim Peake, using our Principia Space Diaries.